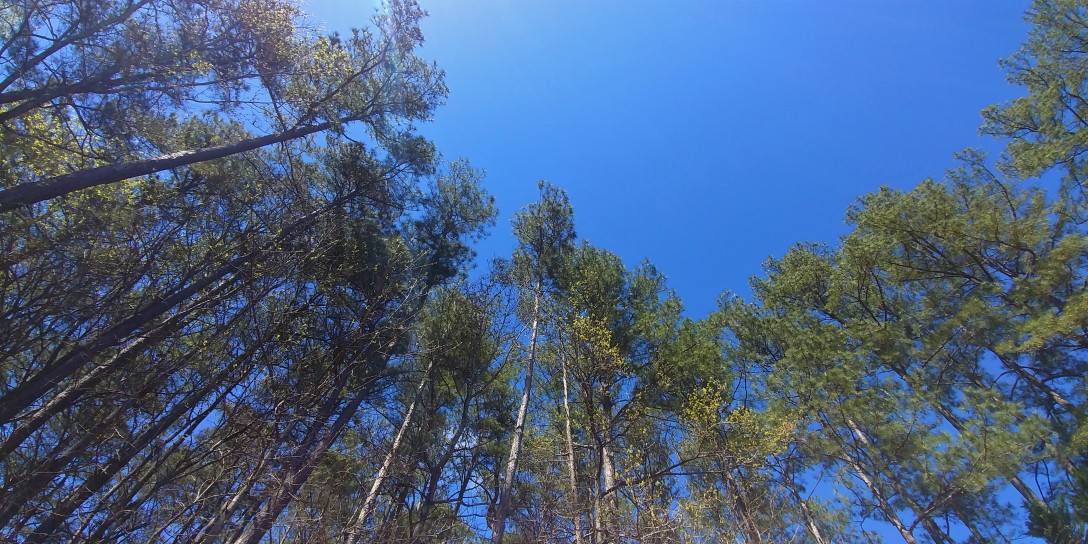 It’s a beautiful spring day in north Georgia. Mid 60s. Low humidity. That tree in my front yard is starting to bloom. The neighbors’ cherry tree is bursting into its full glory.

We go for a walk. A kid in flip-flops flies by on his bike. Two carpenters working on a neighbor’s porch pack up their truck and drive off for lunch. Birds chirp. Deer nestle in the shade of the backyard, just beyond the fence. Georgia pines needle into a sky so deep and so remarkably blue that you might believe that everything in this world is right.

But … no. We know better. We all know better. This is the Spring of 2020, a season unlike any that we’ve ever seen or experienced. This damned time remains front-of-mind, a crippling weight on our consciousness, even during a deliciously slow walk on a near perfect day.

Somewhere around two weeks ago, the coronavirus pandemic became real for most Americans. It’s a tragedy that threatens to kill maybe millions worldwide, and certainly many thousands here in the U.S. This catastrophe, the breadth of which is yet to be realized, already has devastated the economy so much that Congress is on the verge of passing a $2 trillion — whaaaaat? — stimulus package, the largest in history. It’s more than twice as big as the bailout package after the Great Recession 12 years ago. And everybody knows that’s not going to be nearly enough.

More than half of America has been ordered to stay at home, to work from home if possible, to leave only when absolutely necessary, in an attempt to blunt the virus’ march. New York, the American epicenter of the illness, is about to be roped off completely. Schools everywhere, from kindergarten through college, remain closed. Restaurants nationwide are reeling, most available only for quick in-and-out pickups or delivery. Supermarkets have slashed their hours so that they have ample time to disinfect the stores and restock for the next onslaught of doomsday hoarders. In most places, only essential businesses — markets, hospitals, drugstores — are open in a relatively normal fashion.

As a result, millions of “non-essential” employees have lost their jobs in the past two weeks in this self-imposed — and, health experts tell us, absolutely necessary — shutdown. The Dow Jones, before upticks in the past day or so on the promise of the stimulus, lost all the gains of the past three-plus years, some of the most economically robust in recent history.

Our retirement portfolio, I assume, is taking a hell of a beating. I haven’t looked. Not going to. Not for a few months.

The state of things is so desperate that the president, enjoying a surprising boost in popularity (because people rally around the chief in times of crisis, no matter how incompetent that chief may be), is seriously weighing whether a few thousand lives saved are worth closing down everything and wrecking the economy. I’m not sure what numbers he’s crunching. I know they shouldn’t be crunched.

Save the people. It’s that simple.

Health experts are saying the worst won’t come until June or July, or later, but the president still is talking about opening businesses again by Easter: That’s April 12. That’s a little more than two weeks away.

This is the world we’re living in. This is the world that keeps us up at night, and the one in which we awaken, groggily, with a gut-knotting sense of dread. If it’s not the virus itself that’s rattling us — and, again, we haven’t seen the worst of it — it’s the cratering economy, and the people in charge who clearly are winging it in the face of this deadly, unseeable opponent.

And if it’s not the virus, or the economy, or the unavoidable politics that has shaken us, it’s the everyday chore of living, just living, in the time of this virus.

It’s unnatural, what we’re being forced into. Humans are social animals. But we’re instructed to practice social distancing: Don’t get too close, don’t gather in groups of 10 or more. It’s best, they tell us, just to stay home.

We’re told it’s OK, necessary even, to go outside and enjoy a walk when you can. But even then, you’re aware of everyone around you. The virus can live on surfaces, they say.

Like that tree, maybe? Or on that bike that kid rode by?

This self-quarantining/social-distancing/isolation/whatever is a bitter pill that sticks, no matter how necessary it might be. Not to put too obvious a point on it, but the staying home really isn’t the worst of it. It’s the not being able to go out that’s the problem.

Here are my whereabouts in the last couple weeks (and I’m sure it’s similar for a lot of people):

That kind of sheltered life might be keeping us alive. But, man, it’s killin’ me.

I’m grateful, of course, that I’m healthy, and that my family is healthy. As it was before all this sadness and madness hit, that’s priority No. 1. I’m grateful that we live in a comfortable house, in a nice neighborhood, even if our son (who is isolated himself in his apartment in downtown Atlanta) can’t be with us.

But imagining weeks and weeks more of this — oh my god … months?– makes me nauseous. We’re trapped in a panic room while a burglar ransacks our home. We’re stuck in a middle seat in economy, idling on the tarmac during an ice storm. We’re dog-paddling helplessly in a riptide, waiting for the chance to swim back to shore.

And once we do, dammit, I’m going outside for awhile. A long while.