Some of the words being flung around in mid-March 2020 — historic, surreal, unprecedented, social distancing — don’t nearly, can’t nearly, convey what a whacked-out world this suddenly has become. When at some point we look back on this period, in a few months or a few years, many of us probably will settle on one word: scary.

As in scary as hell.

The novel coronavirus, experts are telling us, could kill millions of people worldwide. Without proper and immediate measures to confine it — the social distancing and self-quarantining that, just in the past few days, have been pounded into our consciousness — 2.2 million Americans could die from Covid-19, the disease that springs from the virus. That’s more Americans than have died in every U.S. war. Ever. Combined.

It’s almost beyond comprehension. A lot more than our physical well-being is threatened by this virus, too. From our bank accounts to societal norms to our sense of belonging to our mental health to the basic American right to a hamburger … nothing will come out of this unscathed. Nothing.

The virus has forced us all inside, away from each other, and the effects of that mandated isolation, in a head-swimming flash, have been devastating. Schools have shuttered. Borders — between nations, certainly, but even inside of this one — are being closed down. The Statue of Liberty is roped off, the Empire State Building locked down. Nobody’s traveling. Nobody’s eating out. Nobody’s buying much of anything. Small businesses are closing every day, probably never to reopen. The Treasury Secretary said that unemployment, which has been near a record low and has a streak of 11 straight years of growth, may soon hit 20 percent. The Dow Jones Industrial lost a record 3,000 points in one day.

And so we are left, oddly alone in our homes — maybe for the next three or four months, maybe even more — to worry about a deadly virus, and our loved ones, and a collapsing economy, and our life savings, and the world as we know it. Really. The world as we know it has changed. You can’t even go to McDonald’s and sit down for a damn Big Mac.

This is the whacked-out world where we suddenly find ourselves. And it came at us, from zero to “Oh, crap!”, in 0.0 seconds, flat.

No one is untouched by this virus. Everybody has a story.

After four years of admirably fighting through Georgia Tech, and within weeks of graduation, Luke’s in-person classes all have been canceled. The campus has closed. Extracurriculars have been scrapped. Luke will spend the final six weeks of his college career in his off-campus apartment, taking online classes, mixing only with his roommates, his girlfriend, and an occasional restaurant delivery schlep.

On top of that, the Georgia Institute of Technology’s Class of 2020 — and many, if not all, of their colleagues — will have no graduation ceremony. It’s been scrubbed, like all big gatherings throughout the world. Groups of 10 or more these days are, if not forbidden, much frowned upon. The virus spreads in groups. The overriding message from health experts — right behind wash your damn hands — is to be anti-social.

Luke’s done a lot of unfathomably hard work for a lot of years, and he won’t even get to throw his dang mortarboard in the air. He won’t have a party. We don’t get to see him walk across the stage and accept his diploma, and I don’t get to make an idiot of myself and yell, “That’s my boy.”

Well, I probably can still make an idiot of myself. But it’ll have to be in my house.

I started this blog a few years ago for many reasons. I wanted to practice writing. I wanted to get a few things off my chest. I wanted something to do. And I wanted — all along, this was my thinking — to leave a little record for my family of this short time in what hopefully will be a long and contented life. It’s a diary of sorts, a tiny look into how I think and what’s happening in my life and this world. When, that is, I actually get around to posting something.

This is one for my history book.

Mary Jo finally booted her full-time job at the end of February and moved to part-time, with one major goal in mind: To travel to Cincinnati more to see her aging folks.

Well, yeah … her timing could have been better.

Listening to the news now, it’ll be July or August, at the earliest, before we make it up to the Queen City. Meanwhile, Mary Jo is looking for something to do with the 20 extra hours a week that she suddenly has on her hands. Worrying, it seems, takes up a lot of that.

I haven’t been to the gym, someplace I go at least four times a week, since maybe five days ago. The virus is especially dangerous (as we who are living through these scary times all know well) to older people with underlying health conditions. I’m a healthy guy, I think, but I did have that heart thing not too long ago. And I guess I am older by some standards.

By the way: Screw you, standards.

Whatever, out of an abundance of caution and a house-arrest warrant issued by my beautiful wife, I have become a virtual shut in. I have not been outside the house, other than a trip to the mailbox and a venture onto the back porch, in days. I don’t know the next time I’ll get out.

These are my days, most of them, for the next several weeks …

After breakfast, I mount a cheapie stationary bike parked next to a love seat in our living room (^) and I pedal. I pedal until the sweat is dripping and my patience runs out. I pedal while I think about this world, and the virus, and our finances, and my family, and what’s next once (if?) all this virus stuff passes. I pedal some more.

After my workout, I shower and make my way to the laptop, where I attempt to do some work while cruising the internet for more news. I talk to Mary Jo. I write a couple of sentences. I think about dinner. I read more. My mind wanders. I work a little more. I stay up ’til midnight. I have a fitful night of sleep.

Exhausted, I get up the next morning, eat breakfast, and jump on the bike. I pedal some more. I keep pedaling.

Not to put too metaphorical of a slant on this, but I’m not getting anywhere.

Also, filed under sad personal stories: With Luke finishing his semester cooped up in his apartment, and us stuck here in the house, and me falling into the standards regarding underlying conditions/older people, we’re not sure when we again can safely get together with — actually see and hug — our son.

He has two roommates (one went home). They skitter around town. They could get infected in any number of places, Luke could be infected and not even know it, because they’re young and healthy. But they could pass it on to us.

So we’re keeping our distance. It’s hard. It’s painful. It’s possible that Luke may have to leave school and go to his new job in California — it’s supposed to start in July — without seeing us in any meaningful way at all. FaceTime, maybe.

I don’t know. Maybe we’ll meet in a park somewhere and spend some time with him. We’ll just have to make sure we’re six feet apart. It’s the very definition of social distancing.

For the historical record, I think it’s important to note that there are those out there who still think this virus thing is overblown. We have restaurateurs and small business owners who complain about the mandates for social distancing and self-quarantining. Some are calling the whole thing a hoax. Even conservative Fox News has tacked from that particularly galling political stance and acknowledged the seriousness of this outbreak.

I understand the frustrations. This virus is costing small business owners, and their workers, their livelihoods. I feel for them. I hope we can find a way to help them hold on.

But already it’s clear that if this thing doesn’t kill millions, it will kill a lot. It’s going to get worse than it is now, and if we don’t listen to the experts and stay inside, stay out of large groups and wash our damn hands … well, it could get as bad as some people fear.

Maybe someday, when we look back, we’ll figure that this whole coronavirus caper was just overreaction. But I liken this to the climate change debate. Maybe we are blowing it out of proportion. But, hell, what if we’re not? Are you willing to bet on it?

Perhaps one of the most system-shocking fallouts from the virus tragedy is the loss of sports. (Crowds, again, are taboo.) No Little League. No spring football. No high school soccer. No nothing.

The NBA stopped playing. March Madness, the NCAA’s postseason basketball tournament and one of the four biggest events on anybody’s sports calendar, was canceled. (No office brackets this year!) Major League Baseball cut short spring training and will delay the start of its season until … who knows? The Masters and the PGA Championship, the first two majors on the golf calendar, have been postponed. There’s no Major League Soccer. NASCAR races have stopped.

There’s no live sports on TV on any day of the week. It’s weird.

The fact that you can’t sit down in your living room and watch a ballgame drives home exactly how much our lives have changed.

And then, of course, there’s the shopping. And the hoarding. The last time I was in a grocery store — a few days ago, maybe? The days are starting to run together — you’d have thought one of those famous Atlanta blizzards had rolled through the city. The panic buying is both hilarious and horrifying.

Here’s a Kroger meat cooler during my recent trip: 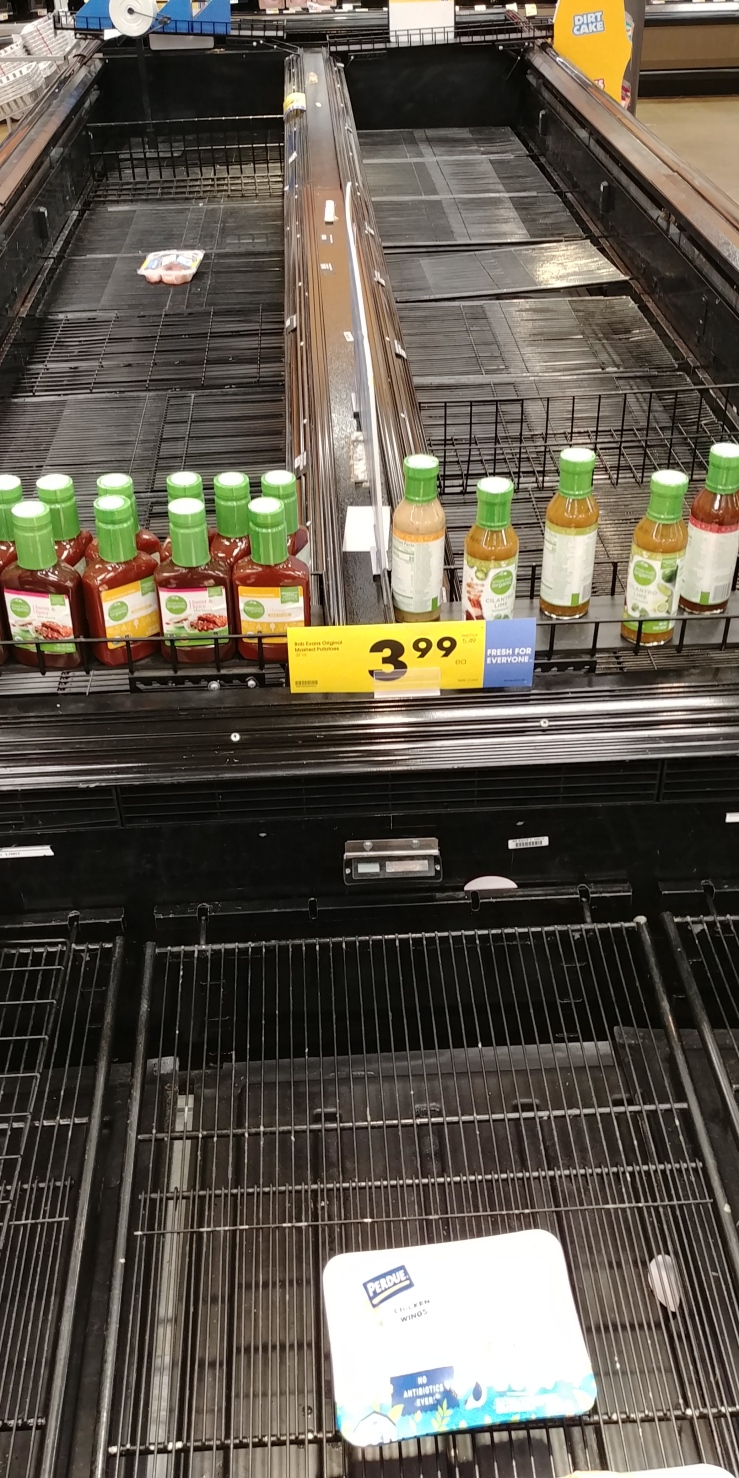 There were no bananas, either. And as far as paper towels, or toilet paper, or napkins, or hand sanitizer, or bottled water? Forget it. Wiped out.

The hoarding passed ridiculous a few days ago and has fallen squarely into the stupid bucket now. Even if this thing gets as bad as the gloomiest doomsayers believe, a lot of people are going to be digging around reams and reams of Charmin in their garages for a lot of years to come.

The defining feature of this ominous time in our lives is this: a constant, gut-gnawing fear. But it’s less a fear of this killer virus — though, for sure, that’s scary — than a fear for the future. The uncertainty is crippling.

Just last week — just last Wednesday — I was having a beer (or more) with the guys after a pickup game. Somebody checked his phone for an alert. The NBA announced it was dumping its season. We looked at each other incredulously.

Something shifted then. We knew it. Finally, we knew it.

And now everybody wonders: Am I safe? Are my loved ones safe? How many will die? Will someone I know die?

If I need paper towels, where do I go? Am we gonna run out of toilet paper?

How long until we get back to anybody’s idea of normalcy? What will our country, what will the world look like once we count the dead, repair our economies and start back on that road to normalcy? Yes, yes … if we get there.

What can I do? What can anyone do?

It’s scary out there, mid-March 2020. And it figures to get scarier. It’s more scary than anything I remember, and that includes 9/11, the Great Recession, a dog that attacked me in the first grade, and that time Luke disappeared in the big wave pool at Six Flags. It’s scary as hell.

And all we can do is keep pedaling and hope, somehow, we get somewhere.