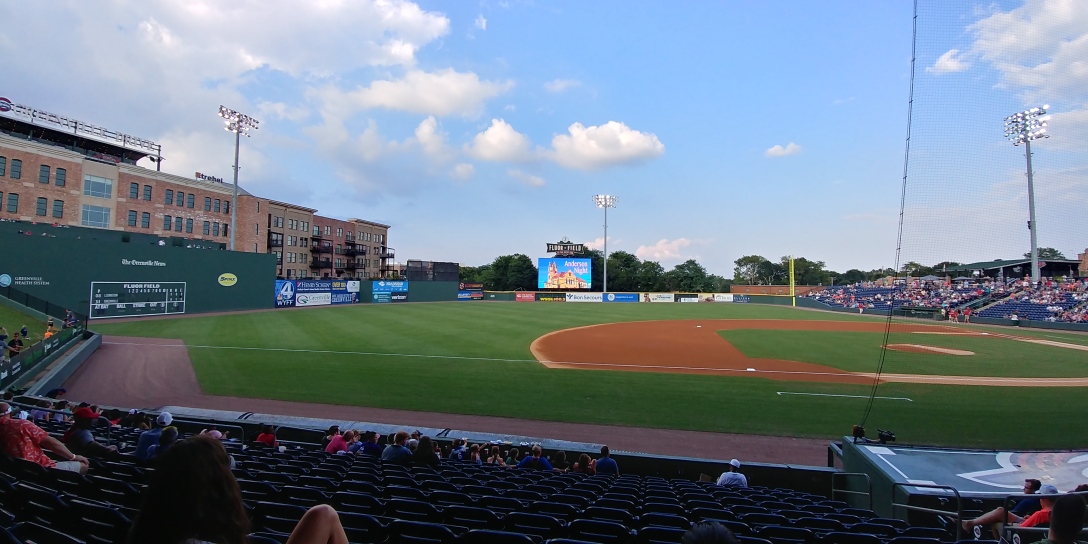 Back in July, Mary Jo and I took a quick road trip (2 1/2 hours) up to a place we had stopped in once before: Greenville, SC. We needed to knock out a Marriott night to keep our points active. And, heck, a little weekend getaway is something we all should do more often. Right?

For a one-night stand, so to speak, this was about as good as you can get. We stayed in a downtown Marriott, strolled Main Street, visited a farmer’s market, walked along the Reedy river downtown and had a couple nice meals (they have a Biscuit Head in Greenville, too).

If you like smaller, Southern cities — small enough that they’re not crazy crowded, but big enough that they offer plenty of amenities — it’d be difficult to top Greenville. The downtown area is hopping. The streets were packed. Restaurants, shops, bars were all filled.

Greenville has so much going for it. It’s an up-and-coming tech and manufacturing town, with jobs bringing young people who want things to do. Michelin has a headquarters there. A BMW manufacturing plant, just up the road in Greer, employs about 9,000 people. Fluor is a big engineering company there.

That’s Fluor Field in the photo above, the home of the Greenville Drive, the Class A affiliate of the Boston Red Sox (which explains, as you can see in the photo, the baby Green Monster in left and the faux Pesky’s Pole down the right field line). The name of the team is a nod to the area’s auto industry.

After a leisurely day driving up from Atlanta, checking in and then wandering Greenville’s downtown area, we walked from our hotel to the park — maybe 10 blocks — stepped up to the window and paid $10 a ticket for a seat that, in a big-league park, would probably set you back $50 apiece. At least.

I spent close to 10 years covering Major League Baseball. I’ve been to most big-league parks. I’ve seen the old and the new. Fluor Field, a good representative of a lot of minor league parks, offers so many things that big-league parks simply don’t, or can’t. Including, of course, $10 seats like the one above.

Before the first inning started, the PA announcer let us know about the beer special in the first inning: $2 a pop, which piqued the interest of at least one person in my party. I left to stand in a not-too long line and grabbed a couple of Michelobs. On the way back, I stood in a totally reasonably-sized line to grab a $3 hotdog.

And then I remembered that, somewhere, a baseball game was happening. My wife was waiting on me.

We watched a little ball, noticed that the visiting team (the Lexington Legends) had an Italian outfielder (Marten Gasparini), cheered a little, cursed some under our breath at the bratty kids behind us and, mostly, enjoyed a warm but beautiful night. In the seventh inning, I went to the restroom (two beers, runaway mustard on my shirt), where someone left dozens of coupons for a free hotdog, chips and a drink. So I did that, too.

Total for the night: $25 for two seats, two beers, two hotdogs, a soda and some chips.

After the seventh, we decided to call it a night. Someone was leading 1-0. I don’t know who won. I don’t really care.

We strolled the 10 blocks back to the hotel on streets still buzzing with people. A salsa band was playing on a plaza outside the hotel in front of hundreds. Lights hung over the streets.

I may never go to another major-league game again.