According to Wikipedia, the font of all knowledge, the U.S. has 59 national parks. They range from Acadia in Maine to Hawaii Volcanoes on the big island of Hawaii, from Olympic, west of Seattle, to Dry Tortugas a little off of Key West, Florida.

A person could spend a hefty lifetime of vacations — or a year — checking out all the national parks, and that person would have done a lifetime of vacations well. Yeah, our national parks are often hot in the summer vacation season, and they can get crowded (lately more than ever). But they are something that, almost everyone agrees, the politicians in our country have done right.

The Family never set out to specifically visit national parks over the years. Mostly, we just ran into them on trips elsewhere. We did a side jaunt to Yosemite while we were in northern California. We saw the volcanoes while in Hawaii visiting my brother. We checked out Denver a few years ago and went to Rocky Mountain. When Luke was just a wee tyke, we did a trip up to Grand Canyon during a spring training trip in Phoenix. We went to the Great Northwest and missed Olympic, but we dove into North Cascades on the way back from Vancouver.

None ever disappointed, despite the heat (we expected snow in North Cascades, the northernmost of the national parks in the contiguous 48, and were sweltering in shorts and t-shirts) and the crowds. We’ve found ways to cool off and get away from the hordes every place we’ve been.

Last year, we aimed for a national park for the first time. Acadia was fantastic. So this year, trying to cram in a vacation before Luke had to start his summer internship, Mary Jo came up with the idea of doing some parks in Utah.

I’m sure that Utah has plenty going for it, but nothing — not the Mormons or the Tabernacle or that big lake up north or all those buffalo or the Jazz — can match the five national parks in the state. We had a week and hit four of them (photo above), missing out on Bryce Canyon.

(There’s only so much you can do in a week. Utah has five national parks, but the state also boasts several national monuments, some national trails, a national recreation area and a national historic site. And, yes, a lot of Mormons.)

Here’s a quick spin through our trip. It’s easier than having everybody over for a slideshow, and you can leave anytime you want. (Click to enlarge.)

We flew into Las Vegas, the first time in Sin City for any of us. Here, Luke and Mary Jo get friendly with some stranger’s armpit while watching the Fountains of Bellagio.

We went through a tunnel on our way to a hike in Zion and found this Bighorn Sheep checking us out. He’s tagged, so he’s used to visitors. 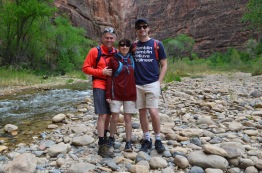 A fellow hiker offered up his services without the asking. Maybe five people in the area when we took this. Awesome.

Zion Canyon, in the southern (and more tourist-traveled, as you can see by the busses on the road below) part of the park. Only the Great Smoky Mountains and the Grand Canyon, among national parks, are visited by more people than Zion.

Zion National Park is in the extreme Southwest corner of the state. It can get pretty crowded — all National Parks can — but if you look around, you can find breathtaking views and a little privacy.

A short walk from a parking area in Capitol Reef paid off with this stunning view of a canyon.

I don’t know what this folding hands thing is, but Luke had me do it with Chimney Rock, in Capitol Reef, in the background.

More of the same canyon. 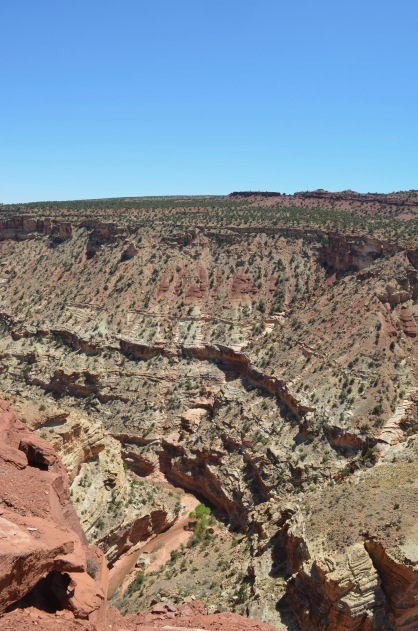 A vertical, because going horizontal just doesn’t do it justice.

Cairns are little stone mounds built to guide hikers on their trek. Only experienced hikers are supposed to build them, and no one is supposed to knock ’em down. So, one of us didn’t know that when she built this one. On the edge of a big canyon.

Capitol Reef is one of the lesser-known national parks in Utah. It sits in between Zion and Bryce to the southwest and Canyonlands and Arches to the northeast.

A bumpy dirt road makes for a spectacular ride through sheer cliff faces in this gorge in Capitol Reef. Fantastic.

Best part about Capitol Reef and this trip into Capitol Gorge? No crowds. Like, zero.

You don’t have to be an experienced hiker to enjoy some truly eye-popping scenery in Utah. This is only few scrambling steps across from the visitors center at Canyonlands National Park.

In Arches National Park, outside of Moab, Utah, some 2,000 stone arches are featured. May visitors go in the early morning or at sunset to catch the sun on the red rocks.

Sun and shadow at Arches. And folding hands.

A lot of parks in Utah have these stone arches — one of the parks is named for them. Climb up to them — it wasn’t a particularly hard hike; we saw people with flip-flops doing it — is well worth it for the views.

Stick your head through this arch in Canyonlands, and this view awaits.

Mary Jo and Luke relax for a bit during our trip to the gorge.

In the shadow of an arch at Arches.

Fancy lens flare as the sun starts its way up over Arches.

A peek around her son at Arches.

I don’t have any idea of what this plant is. But it’s pretty. And I needed another vertical for the show.

Luke and I took a quick hike to the White Rim for perhaps the most spectacular viewpoint of the week. Here, he’s standing high above the desert floor and looking even further down into Monument Basin.

Late morning in Arches. About three scrub brushes up from this dry river bed, with the sun pounding, we decide to call that a hike.

Much of the desert terrain at arches was flat and fairly easy to cover.

A selfie. Mary Jo is, indeed, standing on a rock.

After our last day in Arches, we headed back toward Vegas and stayed the night in this Airbnb in Cedar City. It’s a basement living space designed by an artist who works with metals. Cool and unique. Like Luke, reading a book.

Because it’s in the desert, Arches can heat up quickly. In the winter, though, it can be brutal.

Arches, it’s not hard to see, is in the Colorado Plateau high desert. The visibility in the morning is approximately forever miles.