My annual golf trip with my brothers is this weekend, and I am approaching it like I always do; ill prepared and hardly giving a damn about how bad I’m liable to be. Hardly.

Some day, some day soon, it would be nice to drive over to Pawleys Island, just south of Myrtle Beach, and actually play well for four or five rounds. But to play golf well, I understand, you have to play a lot. I don’t. Thus the bad golf and the beer necessary to wash it down.

Golf ought to be, like a lot of things in my life, a heck of a lot easier than it is. I’ve been playing since I was 12 or 13, when my dad first took us out to a muni course in upstate Delaware, allowed us to toss off our sneakers and had us hack away barefoot in the grass as he maneuvered his way around 18 holes.

I’ve played in maybe 10 states, a couple different countries and a lot, way back when, in one heavenly U.S. territory. But I’ve probably never played more than, say, 20 rounds a year. You can’t get good playing just five or 10 rounds a year. Even if you do it for  25 or 30 years. (Or more … shut up!)

The problem, other than the lack of regular playing and any semblance of athletic skill, is this: Golf is complicated. It ought not to be. But it so, so is.

Here’s an example, via an email to the two brothers who will join me this year in South Carolina (older brother from Hawaii is out): 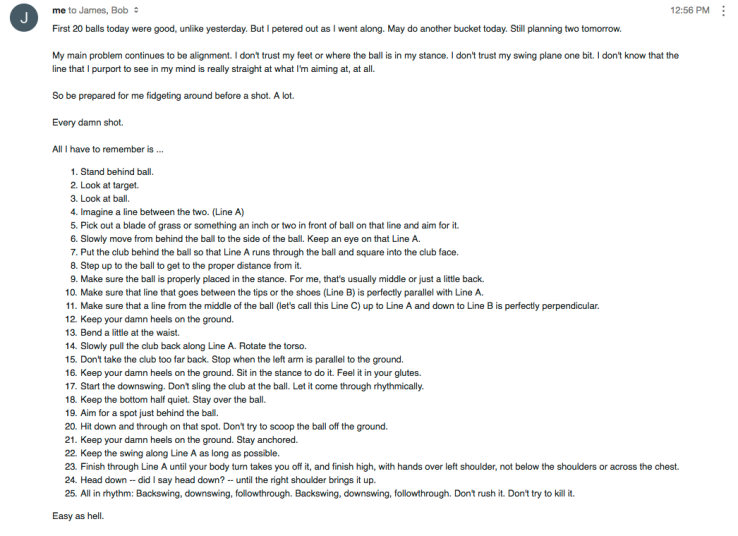 And that’s no exaggeration.

I guess, if you play golf enough, those 25 steps maybe boil down into one or two. The mental burden eases. All the physical turns into so much muscle memory. But, right now, considering I have a major problem just figuring out how to stand next to the ball — at the practice range, I am almost literally dancing around the damn thing trying to line up my shot — well, the weekend, golf-wise, does not look promising.

I’d better make sure the fridge is well stocked.