When I was just a wee lad,  more we-er certainly than I am today, the folks packed me and most of my siblings (maybe all seven of us, though I’m thinking the oldest may have been out of the house by that time) into the station wagon one summer and hitched up the homemade trailer. In that rickety blue wooden trailer with the fold-down top was everything we needed for an adventure: our huge tent, our cots, a bunch of food, dishes, napkins, paper towels, a tank of propane, all the clothes we’d need and pretty much everything else that wouldn’t fit into the wagon. Considering eight or nine of us were in that old Ford, that meant pretty much everything.

We drove to Canada. I just looked this up: From Willow Grove, Delaware to Prince Edward Island, Canada is 974.2 miles.

My dad was behind the wheel the whole way, my mom up front with him, and one of us (probably my youngest brother, Mark, or my sister, Jean) was squeezed in between on the bench seat.  The rest of us spread out where we could, seat belts be damned, soaking in the scenery and breathing in 1,800 miles worth of second-hand smoke (from both Mom and Dad).

That was a family vacation back then. At least it was ours. And it was glorious.

We rattled past Wilmington and Philadelphia and saw New York City in the distance, I think. We rumbled on through Boston and into Maine. We stopped in Maine, as I remember, for a church dinner to eat lobster. (I probably had grilled cheese.) We walked in the mud hundreds of yards offshore when the tide was out at the Bay of Fundy, then took a ferry over to PEI. We swam. We laughed. We argued. We played golf. We camped. We ate just-caught fish cooked over a campfire for breakfast one morning. We guzzled freezing-cold water out of a natural spring (which I’m pretty sure is against the law now).

That was probably the grandaddy of all the Donovan family vacations, trips which remain a huge part of the still-flickering narrative of my childhood. I often ask my mom, when I see her now, how she and my dad (who died more than 30 years ago) could afford to take a group like that on vacations most every summer. How they avoided, somehow, killing us all in the process.

She never has an answer. She shrugs. They managed. Somehow.

I’m sure my dad borrowed the money when he had to, went into debt, put off the bill collectors as long as he could. Seven kids are expensive, you know. But we did these trips; camping in the Blue Ridge Mountains a few times, the Canada excursion, a trip to see Six Flags and Stone Mountain in Georgia.

I’ve carried on the memories of these adventures, consciously from the start, with my own much smaller family. As I’ve said here before, we showed Luke what we could, with trips to Hawaii and Italy. We went to California (at least three times) and Florida (probably more than that). We traveled to Texas and Arizona and New Orleans. We took a trip to Seattle and drove up into Canada in ’16.

In June ’17 (I know, I know, this is a little late), we flew into Boston to vacation in a corner of the country Luke hadn’t yet seen. We spent a day or two in Beantown, rented a car and drove up the coast into Maine. I hadn’t seen it since the first time, from the back seat of the family wagon.

This, obviously, was a bit different. I was driving. Luke had the window seat in the plane and the whole back seat of the rented SUV to himself. He had his own beds (or a couch) in Airbnbs and in two or three hotels. Nobody smoked. He ate lobster. We didn’t quite make it to Canada.

This trip, close to 50 years after the Donovans of Willow Grove rode some of those same highways, was glorious in its own right, though, and it served the same purpose. It showed Luke (and reminded the three of us) that a whole world worth seeing lies beyond our front door. And that we need, all of us, to get out and see it every now and then.

I hope Luke remembers it 50 years from now.

Here’s a delayed look at our ’17 vacation. Plans are underway for ’18.

(You can click on any of the photos for a larger version, with captions.)

We started in Boston and spent a couple days doing tourist things, including the Freedom Trail. Here are two of us at the Massachusetts State House, on the edge of the Boston Common, where some annoying tourist (or three) had the audacity to get in my damn shot.

I’ve been to Boston dozens of times. Drove down Commonwealth Avenue a lot. This was the first time I walked it, right down the middle, past statues and greenery and past all the rowhouses. Sometimes you need to get out of the car.

We stayed in the South End of Boston, in the Jamaica Plain neighborhood near a T station, in this Airbnb basement. It was actually pretty cool. Made us feel part of the ‘hood, which was working class and entirely Boston-looking. Here, Luke is looking at some strange electronic device. 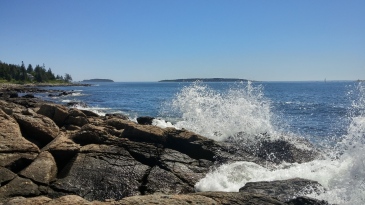 We rented a car, drove up the coast, stayed a night in Portland and then moseyed our way up to Acadia National Park. All on our way, there were dozens of places to stop. We easily could have spent hours at some of these spots.

Waves and rocks and pine trees. We thought this might look a lot different in January. We thought, too, we weren’t in any hurry to find out.

Waves crashing on the rocks somewhere. It’s funny that, three days into a trip to Maine, you’ve seen this 100 times, but every time, you’re convinced that THIS is the most beautiful spot you could ever see.

Again, in January, might not be so pretty. But, dang.

This is the cove in Georgetown where we ate lobster on the wharf at the Five Islands Lobster Co. The FILC, which no one calls it but me, was a shack on a wharf. The lobster was fresh and sweet but, like all the lobster we saw in Maine, waaaaay overpriced for something so readily available. I have a picture of a couple of us at a picnic table chowing down (I think Mary Jo had grilled cheese), but wind, sun and a little chill don’t make for a great snapshot.

Waves crashing on the rocks. Stop me if you’ve heard this before.

I shoulda been a photographer.

If you went to Maine and didn’t stop here, I’m not sure you really went to Maine. When Forrest Gump ran from one end of the country to the other, he turned around at the Marshall Point lighthouse in Port Clyde. This is it. Another beautiful day. (I got a little hot at Mitch and Maude for getting in my shot. The audacity.)

This is pretty. No idea where this is. I mean, other than Maine … Wait. This is Marshall Point, from another angle. Didn’t recognize it without Mitch and Maude. 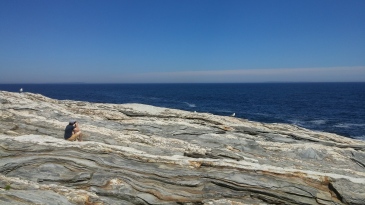 Rocks, birds and the ocean. And, if your’re lucky (like we were), a lot of blue, blue sky.

Mary Jo and Luke (not left to right), after hiking to the top of Cadillac Mountain, with Bar Harbor, a really nice town overrun with tourists, in the distance. I might like to see Bar Harbor on a nice clear day in January. In June, it was hot. (Seriously, this view: You don’t get that in Alpharetta, Georgia.)

This is a lighthouse. I don’t remember which one. We probably stopped at about six or so of them. A quick Google search tells me that we could have seen every one of them in Maine, if we wanted to stop at about 60 more. 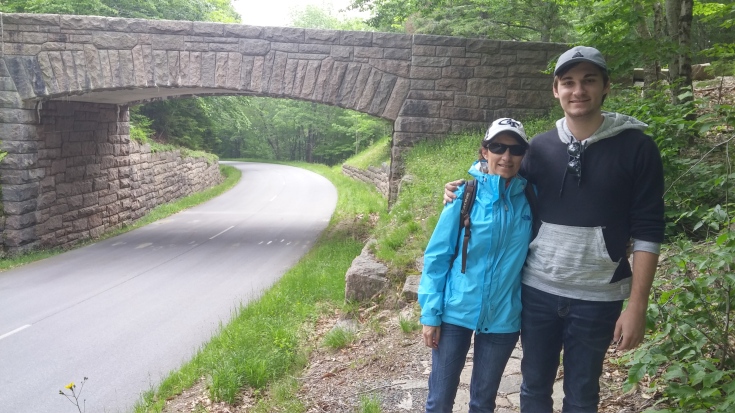 The Carriage Roads and stone bridges in Acadia National Park were paid for by some Rockefeller and were meant to accommodate hikers and carriages. They’re really beautiful and we found them, even in the middle of summer, nicely quiet.