It was almost 11 o’clock at night in Willow Grove, Delaware, when Neil Armstrong, in glorious black and white right there on the little TV in my parents’ bedroom, made his way down the ladder of some spider-looking contraption and stepped onto the moon for all our world to see.

We, as a species, have done a lot in the last half century, scientifically and technologically. From smartphones to autonomous cars — autonomous electric cars — from Walkmans to iPods. From Prozac to the internet to AI to flat-screen TVs to 4 for $4s.

But for pure inventiveness, how do you beat the sheer audacity, the unvarnished brassiness of an attempt to send humans to where no human had gone before — to walk, no less, on the fricking moon! — and bring them back again? How do you top Apollo 11?

Think of the absolute cockiness, the laughable impetuousness of the simple idea. And we — humankind — pulled it off! Even now, 50 years later, it’s difficult to fathom, in a nod to Armstrong here, what a huge leap we made. It was, it remains, an impossible leap.

This was breathtaking in not only — let’s just say it — the balls it took, but almost as impressively, in how quickly it unfolded. Barely eight years after Yuri Gagarin first slipped Earth’s hold and sent the U.S. scurrying to catch up, less that a decade — or a de-CADE, as JFK said — after declaring we were shooting for the moon, we were there. (And not because it was easy, but because it was “hahhhd.”)

This was an undertaking so bold, so ridiculously far-fetched, so incredibly far-reaching that it took millions of hours of hard thinking and hard work from thousands and thousands (as many as 400,000) of the country’s smartest and most dedicated people to manage it. In the end, what they came up with seemed both genius and madness.

They strapped three men on top of a fricking bomb, blasted it into fricking space, then pointed what remained of the rocket to the moon. As they closed in on their target, two of the men (Neil Armstrong and Buzz Aldrin) climbed into that spider-like contraption that they toted along for the ride, landed it, somehow, on the surface of a strange rock 238,900 miles away from Earth (they had to avoid a bunch of boulders to find a nice flat space to put that spider down), then stepped out into an airless, gravity-light wasteland that man knew little about.

After a couple hours walking around, the two guys climbed back into the contraption (the lunar module, or LM, dubbed the Eagle), blasted off again and somehow docked the Eagle in fricking space with the remaining part of the rocket (the command module Columbia, piloted by the left-behind member of the trio, Michael Collins), which had been circling the moon waiting for Armstrong and Aldrin to return. Armstrong and Aldrin rejoined Collins in Columbia, the astronauts jettisoned what was left of the lunar module (they had left the base on the moon), then the three of them turned the spacecraft back toward Earth, ditched the last part of the command module as they closed in and managed to enter our planet’s atmosphere without A.) bouncing off into fricking space, from which they’d never return, or B.) burning up in re-entry.

Once they did that, the three men, in a capsule smaller than the tiny bedroom I’m sitting in now, a pod that was humming along at about 25,000 mph as it shot through the atmosphere, splashed down in the Pacific Ocean about 900 miles southwest of Hawaii (three parachutes slowed down the capsule), where they were lifted into a giant helicopter, whisked onto an aircraft carrier, stuck into isolation (nobody knew anything about possible space germs), chatted with president Richard M. Nixon and were proclaimed heroes for all time.

They were able to accomplish all of that — incredibly, improbably, all that! — because of the imagination, intelligence and hard work of those thousands of people (Thomas T. Donovan of Willow Grove, in his small way, being one of them) and a specially designed state-of-the-art computer that, amazing as it was in 1969, was less powerful than today’s smartphones.

Really: My phone can’t seem to get today’s weather right, but something X times dumber than that guided men to the moon.

In 1969, these three men put their lives on the line (Nixon had a speech ready if they didn’t come back) for one reason: To prove to Americans, and to the world, that whatever cockamamie ideas anyone could concoct — and stepping onto the moon was the cockamamiest — humans could accomplish.

Somewhere around 600 million people, a fifth of Earth’s inhabitants, watched Armstrong’s step that night, including my whole family in the big old red house in central Delaware. 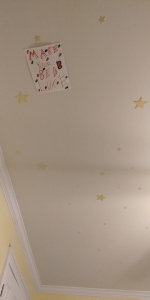 A few days ago, I was messaging with my son, the computer engineering major, about the anniversary of the Apollo 11 moon landing. When he was just a wee kid, as I put him to bed underneath a ceiling peppered with glow-in-the-dark stars — those stars are still up in his room (<) — I used to tell Luke to dream big. Corny, but not.

In our chat the other day, we kicked around what mankind could do, all these years after Apollo, to make a leap like that today. A trip to Mars, already in the planning, wouldn’t cut it; we’ve already stepped foot on another world. Beaming someone up, a la Star Trek? Time travel? Curing cancer? Achieving immortality?

Affordable health care for everyone? Democrats and Republicans holding hands? A woman as president of the U.S.?

“I dunno,” Luke says, “I think immortality might knock the moon landing out of 1st place.”

Maybe. But it’s going to take something like that — something unbelievable, something nearly unimaginable — for mankind to outdo what those three men, and the thousands of men and women with them, did 50 years ago today.