In a mental hospital in New York I visited Savannah after her second suicide attempt. I leaned down to kiss her on both cheeks, European style. Then, staring into her exhausted eyes, I asked her the series of questions I always asked whenever we met after a long separation.

“What was your family life like, Savannah?” I asked, pretending I was conducting an interview.

“And what has life been like since you left the warm, abiding bosom of your nurturing, close-knit family?”

“Nagasaki,” she said, a bitter smile on her face.

“You’re a poet, Savannah,” I said, watching her. “Compare your family to a ship.”

“Name the poem, Savannah, you wrote in honor of your family.”

“‘The History of Auschwitz.'” And we both laughed.

“Now, here’s the important question,” I said, leaning down and whispering softly in her ear. “Whom do you love more than anyone in the world?”

Savannah’s head lifted up from the pillow and her blue eyes blazed with conviction as she said between cracked, pale lips, “I love my brother, Tom Wingo. My twin. And whom does my brother love more than anyone else in the world?”

I looked into her eyes and held her head with my hands, and with my voice breaking and tears rolling down my cheeks, I almost broke apart as I gasped, “I love my sister, the great Savannah Wingo from Colleton, South Carolina.”

Such were the passwords of our lives. 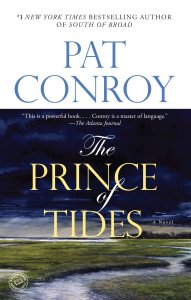 This is a passage from the prologue of Pat Conroy’s 1986 masterpiece, “The Prince of Tides.” It is the story of a battered Southern family, of damage done and the strength that enables them to overcome it. It is a love story of place — specifically, South Carolina and New York City — of  food, of family, and of what that love can do.

I first read this novel on the beaches of Pensacola, Florida not long after the book was published. The sprawling tale is unforgettable, with so many vivid characters and well-drawn scenes, but this one between the main character and his sister especially has stuck with me over the years. I read it again every once in a while. It never fails to make me gasp.

That’s amazing, isn’t it? Whether you enjoy Conroy’s style isn’t exactly the point. The best writing, the best storytelling, the books that you like, the writing that you may not even realize has a “style,” holds a gripping power to make you laugh, to gasp, to cry, to exist in the scene. Good writing compels you to keep turning the pages and to pause to consider what the people on those pages are going through, what they’re learning, what they’re living.

To me, Conroy was, as I said, a masterful storyteller. Some found his novels overblown, his scenes overwrought, his writing too florid. I get that. But, whatever. All I can say is that I bought it all, in every one of his books. I don’t see how you couldn’t be both enraged and charmed by Tom’s mother in “Prince of Tides,” fall in love with the swamps and the smell of the lowcountry he called home, yearn for the dishes he so lovingly described.

I offer this up as a recommendation, surely, for anyone who might take one from such a lightweight reader. But I hope it might also serve as a reminder, mainly to myself, to occasionally re-read something cherished. Someday, maybe, if I’m looking for something that inspires, as I’m tapping away at another blog post, maybe I’ll trip across this post and rediscover Conroy.  That would be a good day.