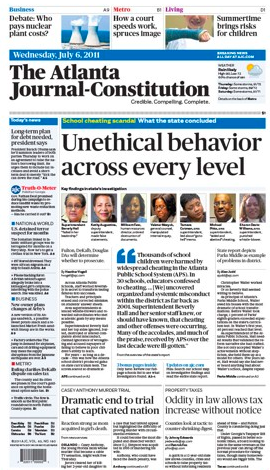 I grew up on newspapers. My dad worked for the Middletown [Del.] Transcript as a young man, setting type and running the press. Years later, he’d return to the Transcript. It was his last job, too.

When we moved to Willow Grove, we had the Delaware State News delivered to our house every day, slipped into a little plastic tube attached to our mailbox post. A lot of people took their paper like that back then.

When I finally thought about what to study in college — after high school, in what they now call a “Gap” year, but I called a “I Don’t Know What the Hell I’m Doing” year — I fell into journalism for a few reasons. I read the newspaper religiously. I could put a sentence or a few together. (Mom was an English teacher.) I thought some hot Arizona State women might be interested in a studly j-school guy like me. I was lousy in math. And I couldn’t think of anything else.

Plus, I thought, what the heck: Journalism is cool.

Journalism, as I saw it then, was Bob Woodward and Carl Bernstein and Deep Throat bringing down a crooked president and fighting for the little guy. It was a chaotic newsroom and exotic assignments in faraway places. Journalism was your name in the paper or your face on TV. As a journalist, I figured, I’d be involved. I’d be a good guy.

Back then, to be a journalist meant standing for something. It meant being impartial. You told both sides of every story. That’s how it was done. Making sure your sources were impeccable was required. Getting a second source for everything — everything — was expected.

A classic journalism maxim an editor of mine had on a plaque in his office:

If your Mom says she loves you, check it out.

Journalists, especially newspaper people, were trusted then. Maybe even looked up to. They were not in the news — well, the TV guys were — but they explained the news, brought it home, told us what was important. And we believed them.

These days, journalists have sunk to barely above lawyers and bankers in the “most trusted professions” poll. (We still kick the crap out of car salesmen, telemarketers and Congress, though.) Despite that slide in perception, though, good journalism and good journalists are still absolutely necessary.

By now, you know where I’m going with this: Maybe now more than ever.

Fake news sites have given journalism a beating by dopes who can’t tell one from the other. So have the slanted websites and TV networks that are pretending to be unbiased. (Clearly, some don’t even bother to pretend.) The Internet as a whole has done a good knee-capping on the newspaper industry in the last 20 years, taking a lot of good journalism (and journalists) with it.

All of that has made clear, good, hard-nosed journalism harder to find. And some — yep, here I go again — are being emboldened by that.

It’s not just the president-elect who — I don’t think I’m overstating this — hates the press and has threatened first-amendment rights. Powerful people on lots of levels — inside of government and outside it — twist things and hide things, knowing that there’s a good chance that they can get away with it.

That’s scary dangerous. We’ve known for a couple centuries that without a robust free press to check the mighty, the mighty will step all over us. Heck, Thomas Jefferson knew it:

[W]ere it left to me to decide whether we should have a government without newspapers or newspapers without a government, I should not hesitate a moment to prefer the latter. But I should mean that every man should receive those papers and be capable of reading them.

The free press is, sad to say, nowhere near as robust as it once was. And it’s not just the fake news and the dopes who fall for it. It’s the aggregators without a conscience, the blind re-tweeters, the blatantly biased … all make it hard to find good journalism.

Good journalism is in the Washington Post. In the New York Times. In Chicago and L.A. In the Atlanta Journal-Constitution, even, where good journalists last year uncovered a massive scandal by public school teachers and administrators that cheated thousands of kids out of a proper education. The AJC this year launched a nationwide look at an epidemic of doctors who sexually abuse patients.

It’s in the Boston Globe:

We all should be encouraged that, despite the headwinds that the newspaper industry and other journalistic enterprises face in these times, economic and otherwise, places that take journalism seriously still exist. Places that put time and effort and money into reporters and writers and editors are still around.

Yes, it might be harder to find them. It’s tricky, as I’ve pointed out before, to separate the real stuff from the slightly twisted. Twisting the message, let’s face it, has become a national pastime.

But the truth is out there. Pick up a good newspaper. That may be the first place to find it. Or pay for a good one online.

Failing that, go to a trusted, established website. Listen to NPR. Watch a real newscast online or on TV.

By now, you should know that you can’t believe everything you read or see. You’ll have to learn to discern.

But good journalism lives. It still matters. It’s still essential. And it’s as cool as it’s ever been.

3 thoughts on “Pick up the paper”