The whole idea of 10,000 steps, as it’s understood among the health conscious, evidently originated in Japan in the 1960s with something called manpo-kei. I’d like to report that manpo-kei has some deep, inscrutable meaning — he who walks well moves like the dragonfly; or, with each step a life is enriched in 10,000 ways. But near as I can tell, the term comes from a Japanese company trying to sell a device that counts your steps. A pedometer. And 10,000 steps, to this company, simply sounded like a good number to market.

Manpo-kei, near as I can tell, translates to “Japanese 10,000-step pedometer.”

In America, manpo-kei roughly means “Fitbit” and a bunch of other “wearable” fitness devices. The 10,000-step thing has taken off in the past few years, too, and become so engrained that the American Heart Association is on board with it. It is a phenomenon.

I got a Fitbit back in late January, a gift from my wife shortly after I went through The Hell. I’ve worn it pretty much every day since then. In fact, I’d guess every day (and night) since. I’m not a slave to its little flashing numbers. I try not to freak out too much if it says I’m a little short on my steps or a little light in my sleep.

But, yeah, I check the thing plenty. I feel some satisfaction when I roll past 10K. I get a little anxious when I haven’t yet hit the mark.

I keep track, thanks to the nifty app, of how many days in a row I make 10,000, and how many days I nail it in a month. I also look at how many minutes I do on the elliptical or playing basketball, what my heart rate is and how much sleep I get (it tracks those things, too).

I may not be in better shape because of all this self-tracking. But it makes me aware, and that’s hugely important. It’s like the Japanese used to say: When you stop thinking about your health, you start trying to slip in that third brownie of the day.

So for whatever kind of shape I am in, post-Hell and pre-dotage, I have to give some credit to the Fitbit and its sometimes-cursed 10,000-step goal. 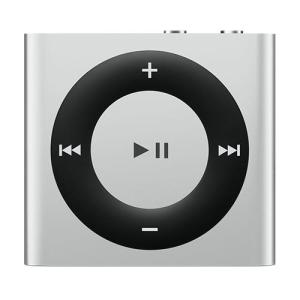 Another piece of technology has helped me work off that third brownie of the day (no exaggeration; two people in the house, a pan of brownies … hey, you don’t want them to go stale): my iPod shuffle. I could not do those days on the elliptical, those hours in the gym, those 10,000 steps without it.

Really, take your fancy iPhone and iPad and useless iWatch. But my iPod shuffle — it’s a little over and inch square, weighs less than a half ounce, holds tons of music and costs $49 — stays here.

I’ve had two shuffles in the past 10 or 12 years, the first one a replacement for my original white-brick iPod. They’ve been through hundreds and hundreds of workouts with me and at least three 10Ks (oy … more talk of 10K). The earbuds are constantly swamped in sweat, but the shuffle keeps pumping out the tunes of my choice through it all.

You’ve seen those people at the gym with their new iPhones strapped to their biceps? The dang thing takes up their entire upper arm. My shuffle clips easily on the pocket of my shorts and is so unobtrusive I sometimes forget to unhitch it before I peel off my T-shirt.

How did people work out before iPods? How do you run without them?

It’d be impossible for me to stay as healthy as I do — however healthy that might be — without my Fitbit reminding me to work out and my iPod shuffle taking my mind off it once I start. It’s not a perfect setup, for sure. But it works.

And those brownies would absolutely kill me otherwise.