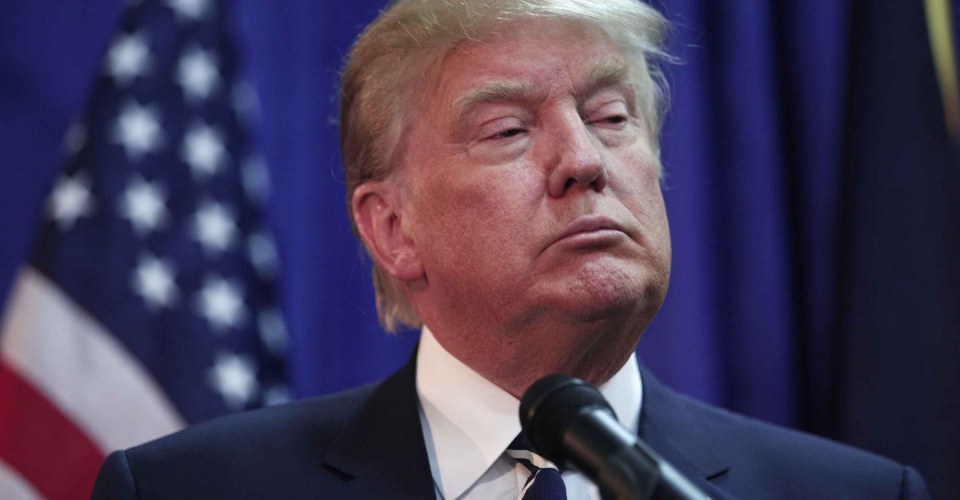 Like a lot of people I know, I spent Sunday night cringing in front of the television set, wondering what new scumbaggy lows the Republican nominee for president could inflict on the American public. I watched the debate with a combination of all-out dread, through-my-fingers embarrassment and a gnawing, nauseating fear that it all could get worse. For everybody.

Like a lot of people, of course, I blame Donald Trump. Plummeting in the polls that he once so proudly tweeted about, blindsided by his own super-scumbaggy words about women that were dug up by the Washington Post, Trump has undertaken a crazy — really, it’s crazy — last-ditch, burn-this-shit-to-the-ground strategy for getting elected.

Near as I can tell, this is it:

Hillary Clinton’s husband Bill is scummier than I am. I’ll show you. Then you’ll have to vote for me.

I can’t stop shaking my head over this.

One of the reasons this is so sickening — this might be hard to handle for some of my left-leaning friends — is the possibility that some of what Trump says might actually be true. This, of course, is what he wants us to think. Trump wants us to wonder about Bill and Hillary and all the rumors surrounding them, instead of looking at him and his misogynistic, racist, depraved and dumbass ways. Which are legion.

Let me reverse for a second: Just before Sunday’s debate, Trump lined up three women (of many) who have accused Bill of sexual misconduct. One flat-out accused him of rape. Trump also brought in (his campaign paid her way to St. Louis) another woman who hates Hillary because Hillary defended a man who was accused of raping the woman when she was 12 years old.

This was some serious stuff that Trump was flinging, even if it barely has anything to do with the person he’s actually running against. (That’s Hillary, not Bill.) So I spent some time before the debate, and some since, scouring the Internet looking for stories. Because, for one, I’m no way believing what Trump says without checking it out first.

This all goes back to something I’ve mentioned before: Finding the truth in politics is hard. Much of the media is slanted, one way or the other. Post-speech fact-checking is a thing now. Soak on that for a bit: We have to have people checking our public speakers to tell us whether they’re telling the truth. And, very often, they’re not.

The point is, being an informed voter … it’s hard. So I looked into the history of Bill and the women who have accused him, and whatever part Hillary played in it.  I don’t want to get too into the weeds on this. Because these are some thick weeds. But here’s some of what I read:

And then there’s this, from what has long been considered a bastion of journalism, though the right thinks it’s clearly a liberal tool: (Note that this was from January, too)

My takeaway: Yeah, Bill screwed around. A lot. But declaring Hillary complicit in what he did … no. I don’t see the connection. It’s like saying any of Trump’s wives were at fault for his infidelities. And he’s admitted to plenty.

(Side note: Isn’t it funny — I mean sad funny — that, by all accounts, Hillary is the only one who isn’t screwing around on her spouse, yet Trump is effectively putting her on public trial?)

The only relevant part in any of this that pertains to Hillary’s electability, that I see, is whether she threatened anyone or worse. Again, I’d urge you to listen to the Broaddrick tape linked above. If you can make up your mind off that, more power to you.

To me, it’s entirely plausible that Hillary, in at least some of the cases of Bill’s infidelities, believed her husband was innocent and was trying to defend him. It’s possible she blames the women for others. It’s also possible she knew he was screwing around but believed his affairs were consensual and didn’t want them to get in the way of what she was doing. At the absolute very worst, she knew Bill sexually assaulted someone (or someones) and wanted to preserve her own blind ambitions — ostensibly, making a better life for people and/or becoming president of the United States — and she wasn’t letting her husband or anyone else get in her way.

The evidence seems to point more toward the benign. Certainly, there’s no proof of the sinister.

After all that reading, I’ve come to these conclusions about this election:

I almost included Paul Ryan with Christie, Rudy and Newt, but he deserves something special. I chopped a YouTube video of Samantha Bee giving the speaker the business. So worth this link. Honest.

Anyway, we have one more of these debates in a couple weeks. And a lot of crap-slinging to endure before it. You’d be right to wonder at this point: Can this thing can go any lower?

Yes. Yes it can. And it probably will. This is Donald Trump we’re talking about. No telling how low this guy can go.

POSTSCRIPT: After I finished this post, this ran on CNN. It asks, specifically, if Hillary attacked Bill’s accusers and concludes that “Trump’s blanket charge that Clinton “viciously” attacked these women to be an exaggeration too far.” CNN is left-leaning, no doubt. But you can read for yourself and make up your own mind. I’ve made up mine.