Well, this won’t be the last post about college and Luke, but there’s this:

We picked Luke up from a robotics competition at Georgia Tech about 11:30 yesterday, drove over to an outstanding pizza joint (Antico) off the north edge of campus, saw it had a line out the door and instead sidetracked to Cookout, a Carolina-based and reliable fast-food place across the street. We ordered our trays, Luke took out his phone and started to look for the announcement from Tech, which was due at noon. 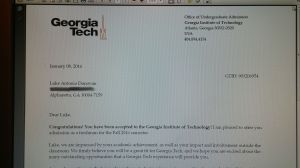 Said with all the excitement of, “Yay, I got a C on that test,” or “Yay, my girlfriend wants to go shopping.”

Mary Jo immediately grabbed him, I snapped the pic above … some more hugging, some more semi-smiles from Luke.

He scrolled through the acceptance letter.

“I dunno … I think I might give Georgia Perimeter [College] a look.”

We went to a GT game after, in which they upset No. 4 Virginia. We went to the Hawks game after that, in which they spanked a very hot Chicago Bulls team. (Luke was honored during a timeout for his charity coat drive. See the vid at the bottom of this post. I should learn to use the zoom.) We drove home, had some Zaxby’s, called it a night. Watched the Bengals choke away one of the more heartbreaking games in Cincinnati sports history.

All in all (despite Zaxby’s and Bengals), a memorable day. Luke’s been accepted to Purdue, to Clemson, to Texas and to the Colorado School of Mines. He still has to hear from NC State and Illinois, and a final word from MIT (he was deferred there).

But Saturday, he earned his trip into the one college he’s thought about since he was a little kid, a good one (according to this, it’s the fifth best engineering school in the country) that’s hard to get into.

These numbers are floating around about the GT class of 2020 who were accepted early:

This is, almost certainly, where Luke will end up. Maybe MIT will come back and show us how we can pay for that. Maybe NC State blows him away. Maybe he’ll change his mind about Tech.

But because he’s been thinking GT all along, this is probably it. We’re kicking around accepting today.

He’ll live on campus, which is what we all want. I’ll reclaim my car. We’ll probably see him, once he gets rolling, maybe two or three or four times a semester or so. We’ll see.

He’ll do his own laundry. Eat what he wants. Sleep when he wants. Wear the same set of shorts for a week straight.

He won’t have us to kick him around anymore.

He’ll also have to study like hell. GT is hard. Scary hard, according to some online discussions out there.

Heck of a ride. Heck of a kid.