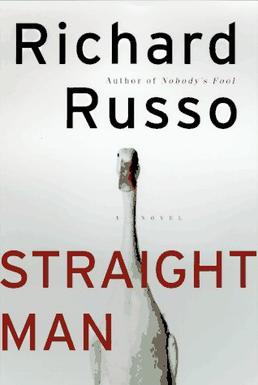 I’m not a literary critic, although the protagonist’s father in Richard Russo’s 1997 novel “Straight Man” is.

To be honest, it’s hard to be a critic when I barely know what the word protagonist means. But the Dad in “Straight Man” — who doesn’t make his first appearance until page 343 of my paperback edition of the book — has made an academic career out of literary criticism, pointing out the shortcomings of Charles Dickens to gain great acclaim, passage into the beds of a few swooning coeds and his way out of favor with his wife and his son, the latter of whom is, again, the main character (the protagonist) of the book.

“Straight Man” is the first notch toward completing a resolution to read a dozen novels this year. I’m not here to offer any criticism. I really can’t because, like many of the books I have read over the past several years, I’m having a hard time deciding whether I liked it or not.

Is that unusual, I wonder? I mean, I did finish the thing, so I must have enjoyed it at least a little bit (assuming, of course, I didn’t slog through it just to get that notch). The truth is, it wasn’t a slog at all. It was a relatively easy near-400 pages, with lots of dialogue and short chapters and humor and lively characters.

That is not literary criticism, by the way. If that’s what makes a good book — ease of reading and lively, funny characters — Sandra Boynton would be Herman Melville and Moo, Baa, La La La! Moby-Dick.

There are certain queer times and occasions in this strange mixed affair we call life when a man takes this whole universe for a vast practical joke, though the wit thereof he but dimly discerns, and more than suspects that the joke is at nobody’s expense but his own.

No, this was a breeze of a read, and that, in a decidedly uncritical way, is a huge plus, in my book. I have — we all have — fought to get through a novel. I have several on the floor, next to the big chair in my office, that I couldn’t manage at all. (This is one, and it was a New York Times bestseller. Can’t remember why it was so difficult. But, for me, it was.)

Mary Jo and I have discussed, on occasion, the wisdom of sticking with a book. For the longest time, I believed that a book was worth devouring from front to back no matter how difficult the read. Maybe it’ll get better, I always imagined. What will happen to So and So?, I’d wonder in trying to keep with it. Why did this get such great reviews?

But Mary Jo is of the belief that if a book doesn’t pull her in right away, if she finds herself starting to skim whole paragraphs, if she has to wander back a chapter or two to get reacquainted with all the characters, if she finds herself skipping forward … forget it. Not worth it. Too many good books to read to waste time on one that doesn’t grab you.

Her point, of course, is a good one. I think, probably, I’ll pull out of more of them in the future. But this one, the first of 2019, was good enough to keep going. It had easy breaks when you could put it down. And I wanted to hear this guy’s story.

The setting — central Pennsylvania, at a small college, inside the English department — was a little too inside, I thought. But as the story rolled on, the setting (write what you know, they say; Russo was an English teacher at Southern Illinois and other schools for some time) became what a setting should be — a setting, the background. The story of William Henry Devereaux Jr.,  a middle-aged professor who is milking the success of his one long-ago novel and riding out his time as an interim chair in the English department, his unloving father, his demanding mother, his wife, his kids and his colleagues takes front and center. Their complicated, impossible, mundane relationships are the stories of this book. Kinda like all good books. Kinda like all lives.

The younger Devereaux explains his link with his father in the following passage. Lily is the younger’s wife, Angelo her father:

Lily, who agrees with my mother that I am unprepared for my father’s return, considers my own reunion with William Henry Devereaux Sr., unnatural, but I think our emotional distance is both sensible and admirable. Our disappointments in each other are deep and probably irrevocable. That we don’t give voice to them, that we don’t try to change each other or ask what the other cannot give, is both wise and prudent. Angelo can get away with asking his daughter where he went wrong because he knew she loved him far too much to answer. My father and I not only understand clearly where we’ve failed in each other’s estimation but also know that a full, detailed explanation awaits the one who is unwise enough to ask the wrong question.

The book’s comic moments propel the story along and ease the narrative load. They include the professor’s joking threat to kill the campus geese, one by one, until he gets a budget for his department; the various machinations of his sad sack collection of colleagues who are entrapped in campus politics; bladder problems; drunken nights on the town; and philandering, his own and others’,  real and imagined.

Whether that makes this novel a great work of fiction or not, I can’t say. I’m not a critic. But it was worth starting, and it’s worth finishing. I guess that means I liked it.