But I’m starting and finishing this one. Now. Because Donald Trump is the Republican nominee for president.

The thing is, I’m not even all that mad at Donald Trump any more. Yeah, he’s made a joke of something that should be stone-cold unfunny. He’s jerked our strings and played us for fools. He’s ginned up the pissed off and misled the down and out. Yeah. That’s bad. For all of us. 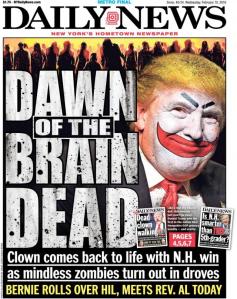 So I’m less hacked off at Trump than I am at his backers. Every damn one of them. From the poor sap who somehow buys into the outrageous story that a dad-made billionaire is a savvy businessman who cares for the average American — really, people? — to Paul Ryan and the rest of the so-called Republican establishment who have sold any soul they had. Their lack of courage and conviction is appalling.

I’m mad at anyone who listens to almost anything Trump has to say — you don’t even have to listen that closely — and believes that he belongs anywhere near the Oval Office. Come on, folks. Really? A man with absolutely no class, no plan that is more than a quarter-baked, no respect for so many millions of Americans, no compassion for so many millions more, no idea of how we fit in the world … and yet he is actually going to appear on the ballot in November.

The answer now seems clear: Because millions of people are so mad, and so stupid, and so blind that they can’t see — they actively, stubbornly refuse to see — what is right in front of them. A fake who cares about nothing but money and his ego.

How can you Republicans nominate this guy? You’ve been sold a bottle of piss by a carnival medicine man who claims it’s a magic elixir to Make American Great Again. Anyone who buys that bottle is a sucker.

Honestly, I get that you may not have liked the alternatives. I understand, you’ve enjoyed the show; you laughed at Trump calling Jeb Bush low energy, and loved when he made fun of Marco Rubio. Remember when he called Ted Cruz a liar and insulted Carly Fiorina’s looks? Yeah, I know. He’s something you’ve never seen before. Fresh, you say. Honest. An outsider.

I could go on and on and on about why this fool — oh, he is a fool — is unfit for the presidency. The examples are endless, and if you’re paying any attention at all, you’ve seen (and evidently ignored) many of them. I’m not going to list them.

(Too many to list. Too many. I will say one of my favorite lowlights of this lowlife — worse than mocking the disabled, or talking about his sexual prowess or the size of his tool — is when he criticized John McCain, the Republican senator from Arizona, for getting caught and imprisoned during the Vietnam War. McCain is more of a man, more of a patriot, more of a public servant than Trump ever was or will be.)

This is not to ding Trump. He’s been dinged plenty enough. He’s dinged himself plenty. Yet he’s still standing.

(It’ll be fascinating to see what Ted Cruz says in his Republican National Convention speech on Wednesday night. Remember, this is a rival who once cooly, calmly and with much thought called Trump “utterly amoral.” If Cruz throws his support behind the nominee, lamely claiming that his rippage was in the heat of a primary, he is as craven and weak as every other Republican who votes for Trump. I expect that. But if Cruz dumps on Trump? Wow. If that happens, Cruz should be the next Republican nominee. I wouldn’t vote for him. But at least he sticks with his convictions.)

It’s hard to see where we go from here. I’m not sure I want to see. Do Democrats and Independents get so appalled at the Republicans’ choice that they come out in numbers to vote for Hillary Clinton? Do distressed Republicans — and I know there are millions out there — put aside their disdain for Clinton and vote for her just to slap down their own party, to quash the alternative?

Or, between now and November, can Trump continue to sell his nonsense and fool the millions more that he’ll need to fool to actually become president? Are there that many gullible people left?

It’s often been said that there’s a sucker born every minute. Nobody knows that better than Donald Trump. He’s played his pathetic party, millions of them, for absolute suckers and put himself a step away from becoming president. You, Republicans, have been duped.

Now it’s on the rest of us.

2 thoughts on “The nominee”