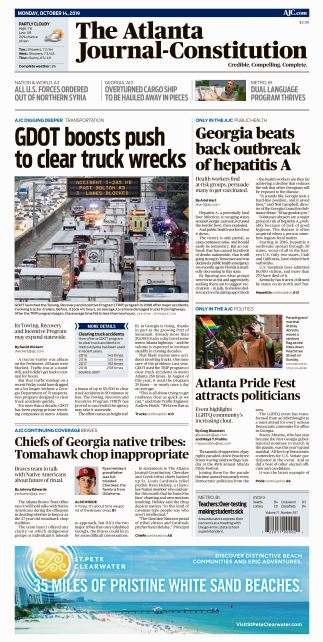 After years of having our local newspaper slung onto the driveway every morning, we recently made the decision, finally, to stop it.

We’re still getting our Atlanta Journal-Constitution every day. But it’s in digital-only form from here on out, so we can read it on our laptops (because we don’t sit in front of those too much as it is), or on our phones (because, sure, we can’t look at them enough, either).

Two important parts to note about this big change; A) We’re continuing to stay informed about what’s around us, by B) supporting local journalism. As I may have mentioned before, that’s as important now as it’s ever been. More, even.

Still, this new digital-only news life is weird, and that’s coming from two people that have lived in, and made a living off of, digital media for more than 20 years. I’ve made tens of hundreds of dollars off the internet in my career (which is why the boy, smartly, is going into non-journalism fields). Probably 90 percent of what I’ve ever written has been intended for a digital audience first. And that’s not counting this blog, which … I don’t know what the intent of this is.

It’s weird, eating my cereal in the morning, scrunching my phone up to my nose, swiping and poking instead of spreading out a double-truck (now we’re talking journalism!) on the table. It’s weird, on the laptop, seeing only half the page at a time (vertical layouts don’t work on a horizontal machine). It’s weird, when I see a bug crawling on the windowsill, not to have something I can roll up to administer a whack.

Going paperless with our daily paper was not an easy decision. It’s definitely going to take some getting used to. But this move is one we’ve been bouncing around for a few years. And I think it is one, for everyone that enjoys the morning news, that’s inevitable. Newspapers, in their plastic-wrapped original incarnation — as I may have mentioned before, too — are not long for this new world, I’m afraid. They not only don’t fill the same role that they used to. They can’t.

The media industry, as I know I’ve mentioned, has undergone a foundational shift in the past 25 years, so that most of us now are getting our news and sports scores and whatever else we need immediately on our phones, tablets and laptops. Some of the news comes via social media, granted, for those who can stand it that way and know what they’re getting into. But the encouraging part, for journalism generally, is not how we get it, but where; still through traditional newsgathering organizations. It still, largely, comes from what we insist on calling “newspapers” (or, in some cases, what we used to call “network or cable news.”)

When the internet first came into being, before newspapers recognized it for the existential threat that it is, the original idea was that the physical newspaper could survive in a digital world by complementing what was online. The thinking was that you could get your news immediately “online” and fill in the rest — the features, the background, the meaty long reads, Luann — with the actual paper product.

It never happened. Now, I’m convinced, it never will.

Take The New York Times. It is, not arguably in my opinion, the best newspaper in the world. Yet the internet, that little bugger, ravaged it. From 2005 through 2017, print circulation dropped by half at The Times, to a little over half-a-million copies a day.

Luckily, The Times recognized early — well, earlier than most — that to survive, with all the print advertisers jumping ship, it had to move online. It had to find a way to make money online. The mothership — the old gray lady physical newspaper — was not going to be the moneymaker any longer.

Today, that thinking has proven correct. The paper of record has more subscribers than ever, somewhere around 4.7 million of them. But fewer than half-a-million are print subscribers.

The Times still struggles to make what it needs to make, but it is relatively healthy. The newsroom is bigger than ever. The company is investing in its real product — good journalism. People obviously are willing to pay for it.

But the actual birdcage-lining “paper?” The Times’ CEO last year gave the print product maybe 10 years before — you know — scriiiitch.

Other papers, not as forward-looking as The Times, may be around longer. They don’t have The Times’ level of online subscription revenue coming in to fall back on. They’ll have to bank on dwindling ad money from their print products. The revenue will continue to fall. The product will suffer. They’ll lose customers. It won’t be pretty.

Meanwhile, digital-only companies (from BuzzFeed to ESPN to Vox ) that don’t have a print product to lean on or to prop up are busy solidifying their online presence. It’s going to be hard for the late-arriving old-guard newspapers to displace the digital-only crowd, which has now had decades to learn how to live online. Many old media companies, as we’ve seen already, will die. Its a new-age natural selection.

The best hope is that people, like my wife and I, will value the experience and talent at newspapers like the AJC (and The Times) and support them by subscribing to their digital products. Hopefully, the “papers” in turn will learn how to make some ad money online, stake out a little corner of the internet, and that will be enough for them to survive.

If it works that way, we’ll all have to get used to swiping and poking at the breakfast table instead of licking our fingers to turn the pages and shaking out broadsheets to keep them out of the bacon and eggs. As a tradeoff, we’ll learn to enjoy what old-time papers never gave us — immediacy, interaction, video, vibrant graphics, clean fingers — while still getting the comics and local restaurant reviews and sheet-pan recipes.

Our complete turn away from newsprint isn’t final. Not yet. As inevitable as the death of the print newspaper may be, my wife and I, for one example, are still electing to get the Sunday paper tossed our way. I’m not quite sure why; other than (not a small matter ) it was cheaper that way. Newspapers, as I said, are still trying to figure this thing out.

Whatever, we’re hanging onto the Sunday paper for a bit longer. Call us nostalgic.